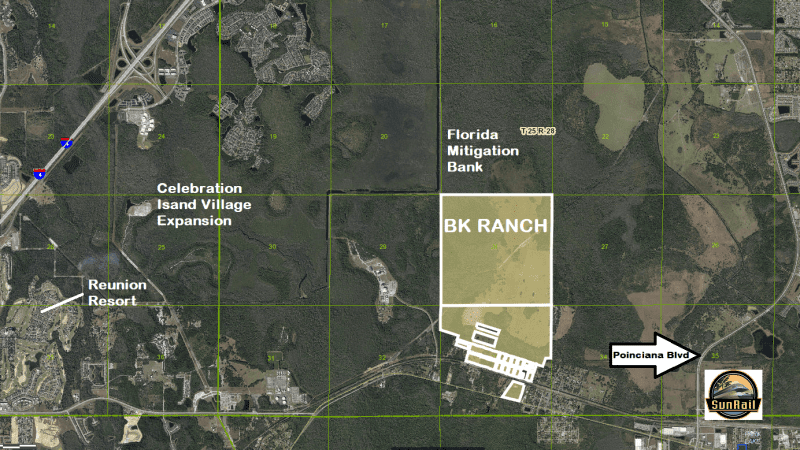 Does Disney World have a surprise in order after purchasing a hefty piece of land grab near Celebration, Florida?…

According to the Orlando Sentinel, Walt Disney World Company recently acquired nearly 1,000 acres of land (965 to be exact) in exchange for approximately $23 million. The land is known as BK Ranch, which is located southeast of Celebration, a planned community near Walt Disney World Resort.

BK Ranch has been up for sale for more than ten years. The previous property owners have invested hundreds of thousands of dollars to get it zoned properly and to secure permits, in order to satisfy the U.S. Army Corps of Engineers and South Florida Water Management District.

The land was intended to be developed into a community of 3,000 homes, with 378,000 square feet of office and commercial space. Because the land is located so close to Celebration, BK Ranch would have been the perfect complement (or perhaps rival) to Disney’s own planned community.

Now that Disney has control of the property, the future of BK Ranch is wide open. Disney has not yet released a statement about the purchase, so its plans are unknown at this time. That hasn’t stopped people for speculating though.

GrowthSpotter has reported that Jerry McGratty, a Westhampton realty owner and broker, believes the land will be used by Disney to manage water processes and conservation in their theme park and resorts. He doesn’t think it will be developed into anything more.

If this is so, the previous owners’ vision of BK Ranch as a rival community will never come to fruition.

But others find this scenario hard to swallow because of the sheer size of the land. Disney World itself is a mere 150 acres, which can be considered small compared to BK Ranch. Some believe that when Disney World buys land, especially that much, its use must be maximized.

Is Disney aiming to expand its theme parks and resorts? Is it intending to build a brand-new community?

Only time will tell.